Lisa Blair was studying at University when she discovered the path into sailing via a stint as a yacht hostess in the Whitsundays that would change her life’s focus. She subsequently devoured books by sailing adventurers like Kay Cottee, Jesse Martin and Robin Know-Johnstone which inspired her to forge her own way in the sailing world. She’s raced around the world in the Clipper 2011-2012 Round the World Yacht Race, has skippered racing yachts, pleasure boats and ferries, sailed solo across the Tasman Sea a couple of times and has worked in countless roles in the marine industry to develop her skills and experience.

So its fair to say Lisa knows a thing or two about facing fear and all the challenges that come from being alone on a sailboat upon a vast ocean. With the upcoming release of her first book Facing Fear, we asked Lisa about her voyage and how she coped with its challenges.

“You spent years planning and preparing for the physical and mental challenges of your Antarctic voyage. Is there anything that you wish you knew before you set out?”

Over the course of the 3.5 years it took me to develop this project I would visualise every possible scenario that I might encounter in the Southern Ocean in the hopes that I could be prepared enough.  By the time I left for the voyage, I really felt that I had done everything humanly possible to make this record successful and to keep myself safe.  Unfortunately, even with all the preparation in the world, the un-foreseen can still happen and that is what I needed to survive through with my dismasting.  I found that it was my preparations that allowed me to manage such an extreme scenario and now having survived that I have gained confidence in my ability to overcome the odds that I never had before.

I am actively preparing to go around Antarctica again in 2021 and I feel that there is not a lot that I would do different the second time around.  I will be adding a waterproof angle grinder to the list of equipment on-board and maybe not taking quite as much food but all in all, I felt that my preparations were as detailed as possible and I will be continuing the same detailed preparation for Antarctica 2.0.

“What would you say to women who are wanting to take on a challenge, to step outside their comfort zone but feel intimidated?”

When I first committed to sailing solo around Antarctica, I had been sailing for just over four years.  Almost no time at all.  And if I had left then I would have never been ready but through the process of committing to the journey and then working out how to achieve it I was able to develop my skills and abilities to the point that by the time I left I was comfortable in the challenge I was undertaking (still scared but I knew success was a possibility now).  For anyone on the fence, leap in…  Because by committing to the goal 100% you work out how to be faster, stronger, more resilient as you need to achieve your challenge.  You effectively grow into the challenge as you go along but if you never start you will never reach that growth and potential.

“A woman alone at sea has lots of time, in between the gazillion boat tasks, to  wonder what ‘heck am I doing out here’. How did you overcome your own self-doubt, anxiety, loneliness and isolation?”

There were many times in the trip when I needed to remind myself that I worked very hard to be having such a ‘wonderful’ time with extreme sleep deprivation and freezing temperatures but there was only one moment when I was ready to quit…  It was at this time that I looked outside myself to my family and they encouraged me and reminded me of how far I had come and helped to re-set my perspective and that was enough to overcome my self-doubt and anxiety.  Sometimes we need to get out of our own heads.

“Could you describe one highlight from your voyage around Antarctica?”

There were definitely a few magic moments at sea and sometimes these would be when I was in the middle of a massive storm watching the winds rip the tops of the waves off and other times I was drifting in a calm with the most amazing colours filling the sky around me.  I learnt to really appreciate the little things on this trip and embrace every moment, whether it was calm or storm and most of the time I was right where I wanted to be.

“What about a low moment when you wished you were somewhere else?”

I remember when I restarted the trip in Cape Town after making the repairs following the dismasting and I managed to get severely seasick that day and the next and then I came down with a massive head cold and at the same time, I was trying to navigate Climate Action Now down the South African coast and cross major shipping lanes.  At one time I had over 16 ships on a collision course with me that I needed to duck and weave around through moments holding my bucket and dry heaving…  That was definitely a highlight of a moment I wished I was anywhere but here.

“Lastly, where is Climate Action Now and how do you think your voyage impacted people’s actions in regards to protecting and preserving our planet?”

Climate Action Now is safely tucked away at d’Albora Marinas the Spit in Sydney just waiting for her next adventure.  She is still wrapped in hundreds of post-it note messages and everyone that sees her has some form of a reaction.  It has been amazing to watch the public interact with the messages on the hull of the boat, I get school groups through and families bringing their children down to read the messages and every time I ask them to complete another post-it note so that one day their environmental action will go on the hull of Climate Action Now and be sailed across another ocean.

More than anything is that she creates positive conservation and inspires individuals to make a positive change to their life for a better future.  I have always believed that as an individual we have the power to create change, it just starts with one thing.

In partnership with Australian Geographic, Lisa Blair will release her first book Facing Fear on 1 November, 2020. This must-read book recounts the inspiring and gripping true story of her solo voyage around Antarctica; a tale Lisa almost didn’t live to tell.

A riveting read for people of all ages who are interested in the triumph of the human spirit, Lisa recounts the highlights of her extraordinary voyage. And along the way, she shows readers that positive thinking and perseverance can make a difference.

72 days into her 183-day journey and 1,000 nautical miles from land, Lisa’s mast came crashing down due to rigging failure. She battled in freezing conditions for four hours to save her yacht and her life. The book’s title, ‘Facing Fear’, centres around the lasting effect of trauma  from the serious accident and Lisa’s brave determination to overcome this in order to complete her trip.

Lisa explores themes of loneliness, fatigue and hypothermia. She shares everything from the extreme pain endured in freezing temperatures, to the “temper tantrums” that transpired after only allowing herself to sleep for 20 minutes at a time. She emphasises the clear link between her physical experience and her mental health, highlighting the valiance and tenacity required to succeed.

According to Australian sailing icon Kay Cottee AO, “Lisa is a great example of how to achieve your dreams with planning, preparation and dedication.”

Lisa recalls mulling over worst case scenarios for three-and-a-half years prior to setting sail in order to mentally prepare herself, motivated by the belief that one should never go on such a voyage expecting to be rescued. However, she admits it is impossible to ever truly prepare for a grueling expedition like hers.

“While I felt I could handle it, I couldn’t predict what challenges I was going to face.”

Lisa hopes her book will inspire women to follow their dreams in the way that she was inspired by great female adventurers and trailblazers who came before her.  She was motivated by their success as a result of their perseverance and hopes that her commitment and determination shine through to influence others in a similar way.

As denoted by the name of her boat ‘Climate Action Now’, Lisa is also a passionate environmental activist and wants to educate people on the positive effects of individual action against climate change. Lisa started the Climate Action Now campaign after witnessing the devastating impact of human consumption on oceans and wildlife.

She recalls sailing through “soups” of plastic, floating in stretches of ocean thousands of kilometres from land. The hull of Lisa’s boat is covered in post-it notes received from members of the public that detail positive actions individuals are taking towards a sustainable future as a result of her campaign. The same post-it note print can be found inside the cover of Facing Fear.

Facing Fear is available to purchase from Australian Geographic and in book stores from 1 November 2020. Read more about Lisa Blair here. 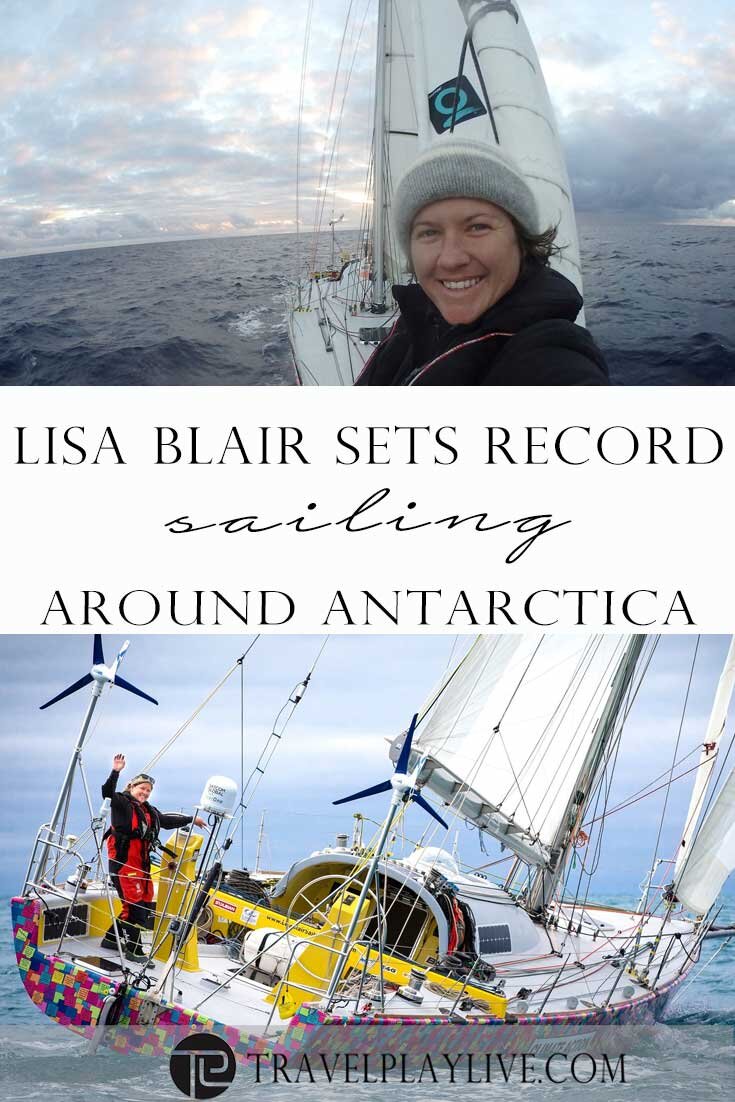 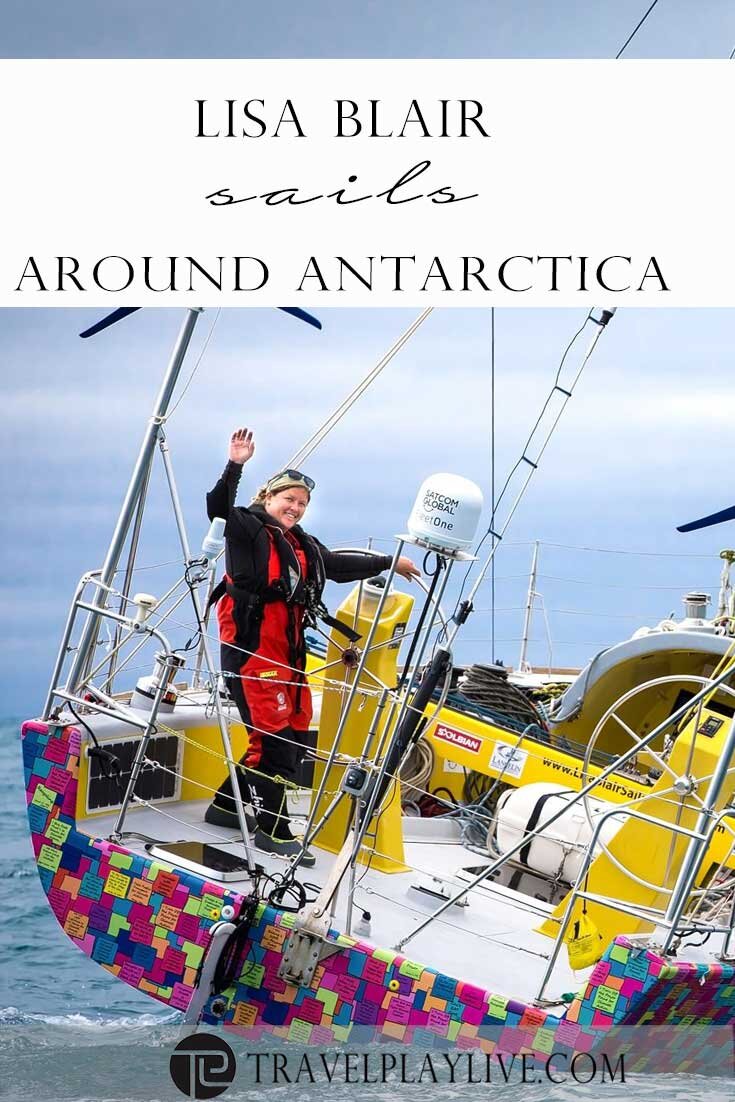 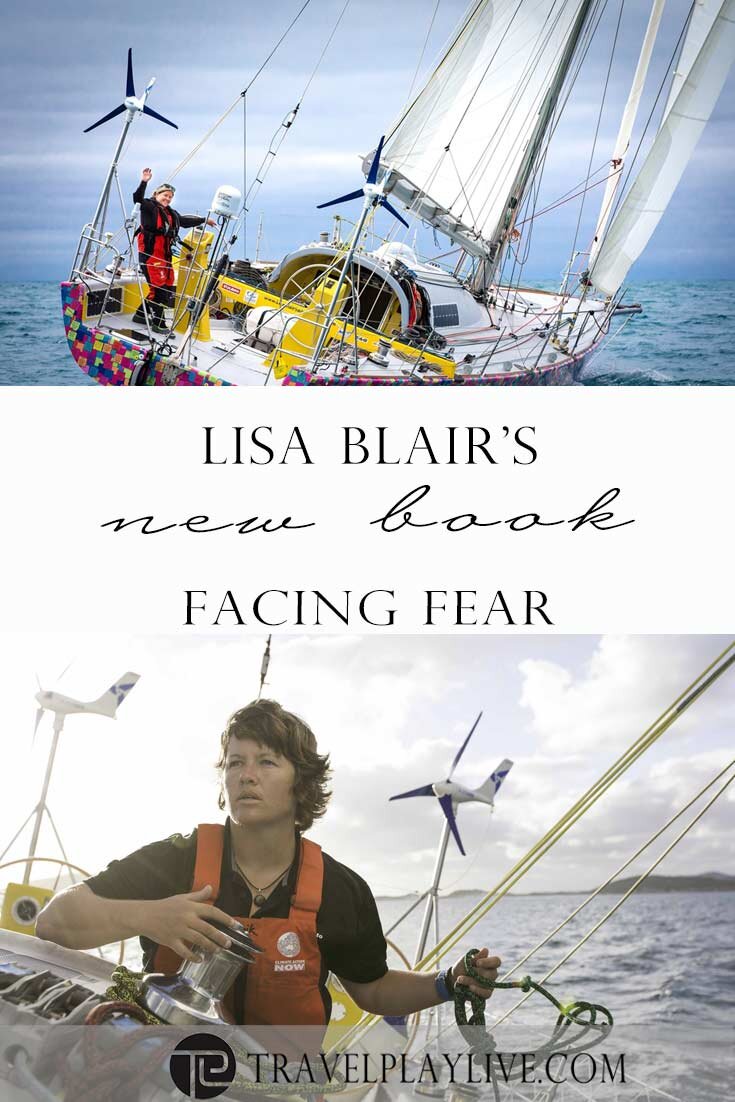 See more offers
PrevPrevious PostNorthern Territory holidays on sale!
Next Post6 Victorian adventures to feel the freedom of the outdoorsNext