Polar pioneer Karin Strand started working part-time with Hurtigruten in between university lectures. 23 years later, with more than 150 Antarctic expeditions notched on her sea boots, she was honoured as the godmother of MS Roald Amundsen, the world’s first hybrid-powered cruise ship. Karin talks about her extraordinary polar expedition adventures.

What is your job and how long have you been with Hurtigruten?

I started with Hurtigruten in 1998, working during my holidays when I was at university, and took a permanent role three years later. My job title is VP Expeditions, and I’m responsible for Hurtigruten’s logistics and operations. I enjoy it because it’s a hands-on and involved role. For instance, I live outside of Oslo, in a more remote area, and just recently I’ve been experimenting on our Zodiacs and exploring new ways to pack equipment that will improve our shore excursions for future trips.

How did you get started in the adventure travel industry?

I started working during my holidays when I was at university. I had a couple of friends who had also worked with Hurtigruten during holidays and they said it was a great way to get outdoors, travel and earn money, which was such a change from being stuck in a lecture hall for most of the year.

When I started working on the ship, it hooked me hard. It took me three years longer than I thought to complete my law degree at the time because I just kept coming back to Hurtigruten and spending time on the ships.

I expected when I joined that I would enjoy the outdoors and fresh air, but the surprise for me was that I loved the work. I loved the inner workings of a ship and how it’s managed. I didn’t expect that at all, but it gripped me.

Hurtigruten was a good place to start my career because I was thrown in the deep end, and if you show enthusiasm and interest, and were willing to show some initiative, then this was a place where you could climb quickly. I saw that quite early on.

I was looking for a role where I wouldn’t get tied down, and I could experiment and try new things. The great thing here is that everyone knows not to tie me down and they allow me that freedom. If there’s something we’re doing, I would like to see if we can do it differently or improve it, so we don’t always keep doing the same things.

What is the appeal of visiting remote regions?

I think it’s the total absence of any human infrastructure – buildings, internet, noise. What grips me the most is the silence, and the fact that we are able to visit these places without too much interference.

A large percentage of the world’s populations live in cities. I don’t think that a lot of people in the world actually know what that freedom is like, of being removed from everything artificial that humans have created, like gadgets and apps. For example, coming to Svalbard there’s no internet and people at first have these separation jitters and then they get used to it. After three days they’re like: “Oh, do we really need to go back to the internet again?” Every person who visits these places comes away feeling the same.

Can you describe a favourite Antarctic moment?

I’ve been lucky to visit Antarctica around 150 times, but one of the memories that stands out for me is one where I saw nature at its most brutal. There was a landing on Petermann Island, off Antarctica, where I saw a leopard seal hunt seven penguin chicks over four hours. I was standing in the water in my waders up to my thighs, watching as this leopard seal swam right in front of me and up to where penguin chicks were learning how to swim for the first time.

Adult penguins, after seeing the leopard seal, would probably have fled further inland but the chick’s instincts aren’t as well developed as an adult’s yet. They all stood in a row on the water line so they’re very easy prey. The leopard seal was just grabbing them one by one, flinging them in the air and shredding them to pieces.

The leopard seal actually threw one chick in my direction. My biologist colleague told me later it was because the seal felt sorry for me. It must have thought I was a pretty lousy hunter just standing there and not taking advantage of this easy prey and it was offering me some food.

That’s a pretty unusual memory to have as a highlight, but it taught me nature can never be cruel. For us, it seems brutal to see these chicks taken like that, but that is just our human perception of what cruelty is. This seal is just doing what it needs to survive.

Another favourite memories is doing a private kayaking expedition to Antarctica in 2016 with five friends. We’d been working together a very long time and we decided we wanted to be dropped off the ship and to kayak 200nm for three weeks with a goal to scout for new sites and landings we could visit on Hurtigruten expeditions.

What about a least favourite moment?

I never like having to cancel landings, where we go off the ship and explore on foot, but sometimes it’s important for everyone’s safety. There’s no weather forecast in the world that shows you katabatic winds, so they just basically take you by surprise. When you’ve been doing this for a while you develop a bit of a sixth sense for knowing when they’re going to turn up.

We had a situation once when we were on a shore excursion, with about 70 people, when these katabatic winds arrived. The water became unsafe and we couldn’t get back to the ship. We were stuck for seven hours on the Antarctic Peninsula and had to use the emergency kits packed on our Zodiacs. It wasn’t a panic situation. We were able to give people water, a bit of emergency food and shelter for those hours, but some people can get anxious. We had both ends of the spectrum – some people were absolutely thrilled and thought it was an adventure. There were those stuck back onboard who were jealous and wanted to be on shore!

Hurtigruten has had a longstanding relationship visiting indigenous communities in Chile since 2002. We visited one little village and managed to bring income to a place where previously there was very little opportunity. On one trip I remember we donated a microscope to them because we had a big Science Centre onboard. We decided to give them this microscope because they received no state funding at all, and this would make a huge difference to the school there. Through the Hurtigruten Foundation, we’ve also raised money that would help the school pay for materials for three years. We had a break from visiting them for about 10 years but we’re now getting ready to go back there.

We’re not always necessarily supporting these communities by giving money either. We also offer career opportunities. We’re going to recruit from all around the world soon and we’re very aware of creating opportunities for indigenous people in the places we go, to start them on the trainee programs we have.

What’s your advice for someone visiting Antarctica for the first time?

You should be aware that Antarctica is exactly as remote and elusive as you’ve heard. Be prepared to go a little bit out of your comfort zone, but know we’re going to keep you safe. Antarctica is a very raw place, and sometimes the weather can look scary and in other times it will be beautiful. You should expect the unexpected and be open to new experiences. That way you’ll be in a position to make the absolute most out of your trip. If you haven’t tried snowshoeing or kayaking before, then maybe this is the time to try it.

What would you say to women considering a career in the adventure travel industry?

There are quite a lot of women now in the adventure tourism industry. If you’re able to meet up with one of them, do it. There are many lessons to be learned from the people who have gone before you. Listen to people around you and their experience. You’ll also need a good dose of ambition and an inner drive.

I think the most important thing is to embrace the idea of adventure – be open to new ideas and new ways of doing things. We can get stuck in a very logistical bubble in this kind of work, but if you get too tied down on what has been done in the past then you can’t do something new. To lead in this industry, you need to have an open mind. I would say all of this applies equally to anyone, regardless of gender.

What does it mean to be named as the Godmother of MS Roald Amundsen?

It is one of the absolute highlights of my career. It is one of my proudest moments because the company as a whole has recognised my work during my career here.

It came as an absolute surprise too. I was asked to find names for a potential godmother for the ship, while the CEO and my colleagues were all secretly colluding behind my back knowing it was going to be me.

The first thing I said when they told me was: “Are you sure you’re doing the right thing? Are you sure you have thought this through properly?” I thought they would choose someone high profile or famous, not one of their expedition leaders.

I’ll never forget the day when the christening happened either. It was in one of my favourite locations in the world (Antarctica) and I got to work with the team through the logistical process of organising it.

Want to join Karin on a Hurtigruten expedition?

As part of Hurtigruten’s New Year Global Expedition Sale, experience a 14-day all-inclusive expedition cruise to Antarctica ex Australia and New Zealand from $10,999 per person (twin share). Book by 20 February 2021, or sign up to Hurtigruten’s newsletter to help plan your own Antarctic expedition. 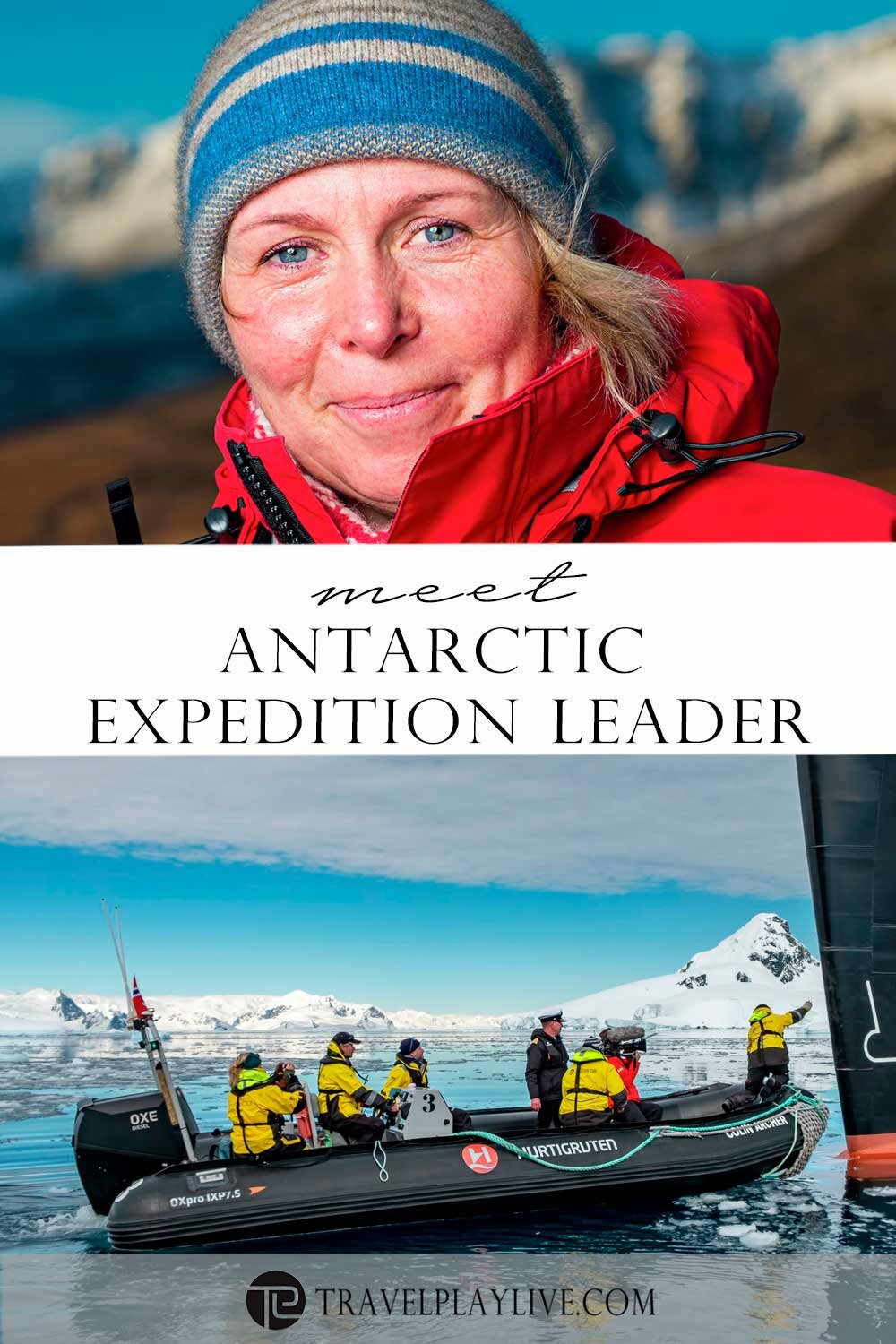 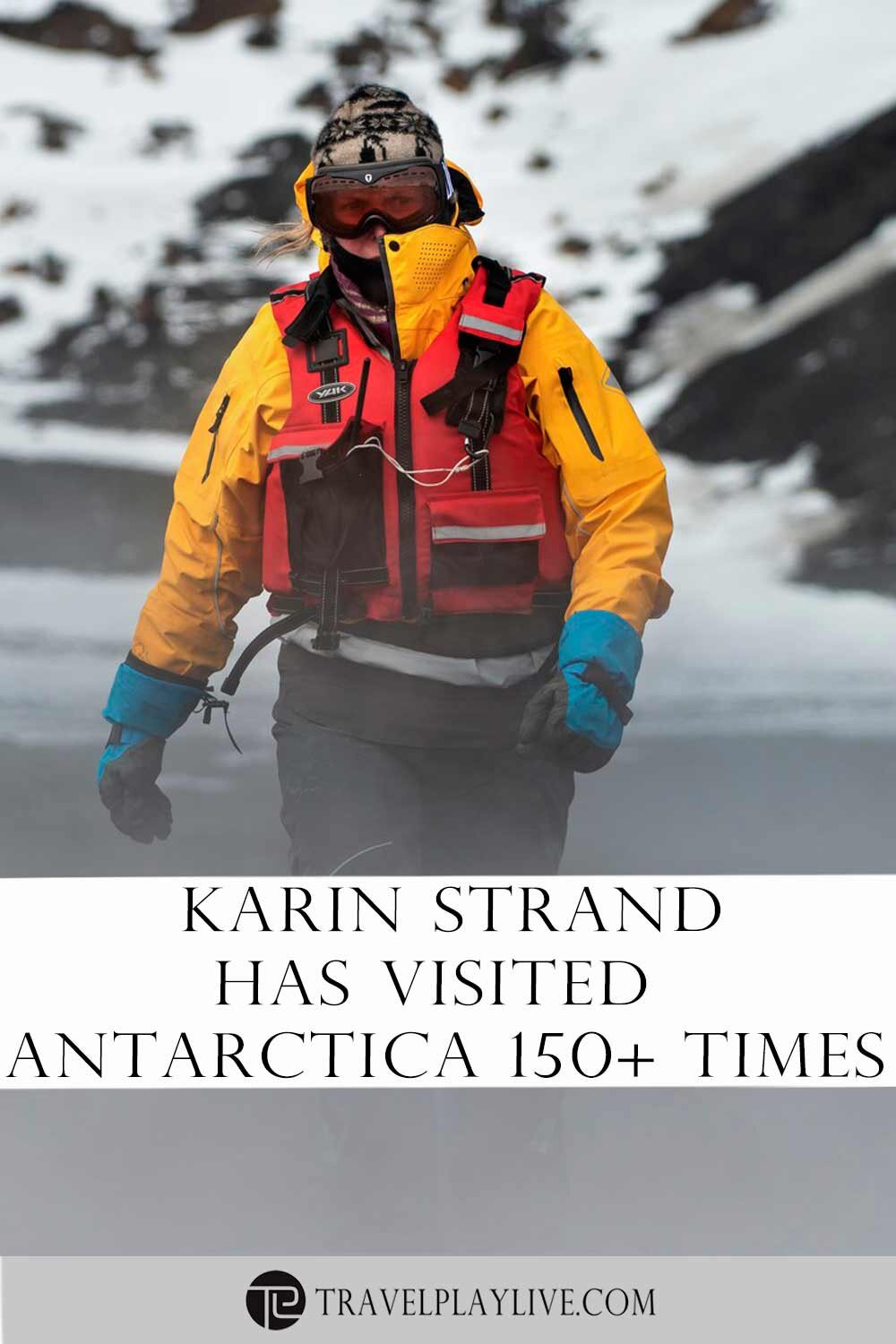 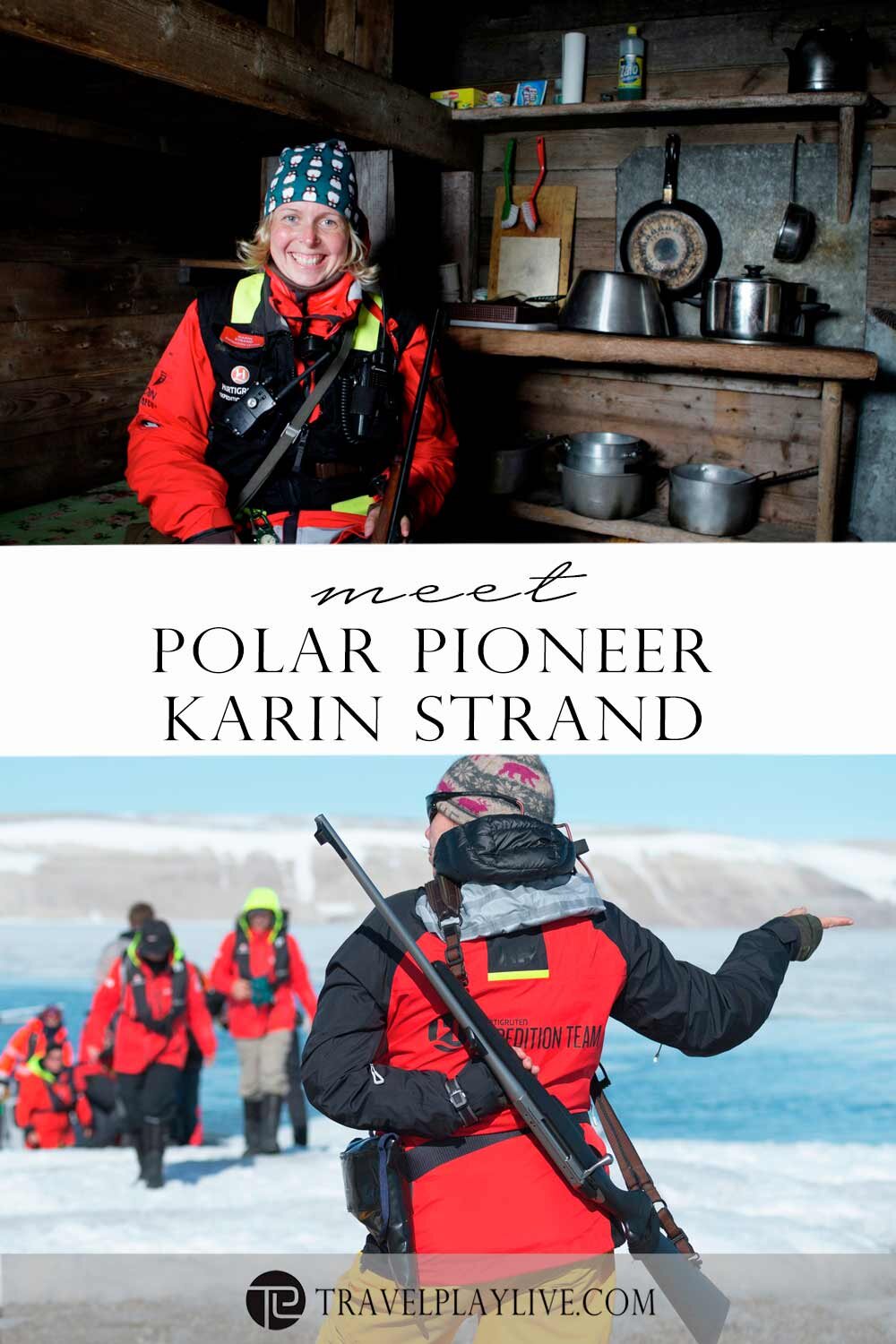